Review: Love Overdue by Pamela Morsi OR Things to Never Say to a Librarian. EVER.

Normally I wind up getting annoyed at authors who write about librarians. The shushing, the snootiness… It makes me wonder if these authors have ever MET a librarian. Newsflash: We are people, not cardboard cutouts from central casting, and if one must stereotype us, one must include a wee bit more booze than usually makes it into the equation. Also Doctor Who paraphernalia.

I teetered back and forth between reading Love Overdue and passing on it for fear it would annoy the hell out of me. Ultimately I read it. How did it stack up? Well… 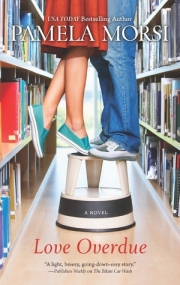 Buttoned-up book lover DJ is all sensible shoes, drab skirts and studious glasses. After an ill-advised spring-break-fueled fling left her mortified, she’s committed to her prim and proper look. When she’s hired by a rural library in middle-of-nowhere Kansas, she finally has the lifestyle to match-and she can’t wait to get her admin on. But it’s clear from day one that the small-town library is more interested in circulating rumors than books. DJ has to organize her unloved library, win over oddball employees and avoid her flamboyant landlady’s attempts to set her up with the town pharmacist. Especially that last part-because it turns out handsome Scott Sanderson is her old vacation fling! She is not sure whether to be relieved or offended when he doesn’t seem to recognize her. But with every meeting, DJ finds herself secretly wondering what it would be like to take off her glasses, unpin her bun and reveal the inner vixen she’s been hiding from everyone-including herself.

For once, an author pretty much nailed the work life of the librarian, right down to the credentials. You know we have to get a Master’s degree, right? And that our workforce is madly competitive and our jobs frequently threatened by small-minded bureaucrats looking to cut budgets? True story. It’s a jungle out there. In many ways, DJ’s story mirrors mine, at least professionally: wanted to work in libraries, got her MLIS, sacrificed city life for a small town for the sake of nabbing her dream job, wound up in a Carnegie building. She believes in outreach to the community, moving into the digital age, and identifying community needs to provide optimum service. Sound sexy to you?

Me, neither. This story had way too much library. I want to read about sexy romantic fun time, not whether downloadable items are replacing books-by-mail or not. Scott’s a pharmacist, but Morsi doesn’t go into the intricacies of the pharmaceutical life, which I’m sure are just as plentiful if not more so than those of the library world. DJ’s job defines everything about her, and while she’s not a shusher, she’s very much the stereotype: buttoned down, repressed, strident, et cetera. Apart from a single one-night stand with the hero back in college, she’s never let her hair down. After a while, she started to irritate me like a bad wifi connection in the YA collection area. She blames the hero completely for their indiscretion. Personally, I’m not sure why anyone should be blamed for a sexual encounter between two consenting adults. Anyway, she’s the one who ran off the next morning without so much as telling him her name, but he’s the asshole? Yikes. She even thinks at one point that he ruined her life. Ruined her life! No, he didn’t get her pregnant. No, he didn’t give her a disease. Yes, it was the best sex of her life. And this ruined her life and caused her to become repressed? What?

I’ll admit her professional decisions contributed to my irritation. Let’s go over them:

1. You don’t take a job in a small town in the middle of nowhere in another state without GOING THERE FIRST. Sure, the job market is competitive, but that’s batshit crazy.2. When you get to said middle-of-nowhere town, you do not allow the head of the library board to strong-arm you into moving in with her. Hello, conflict of interest! Sure, she makes a token protest, but then she proceeds to move into the old biddy’s place. Tsk, tsk.3. So you walked in on your first day and found out a paraprofessional has been covering the librarian position for several years and has suddenly had you thrust upon her as a new boss. Yup, that’s sad, but you know what? See Bad Decision #1.4. All right, so you’ve put yourself in this situation of dealing with said hostile paraprofessional. I don’t care how hostile she is, you don’t call staff meetings at the drop of a hat specifically to cut her out of the team. That’s so wrong. Similarly, you don’t passive-aggressively take her chair and ignore her for an entire morning when she’s late for work. Why not just go around peeing in every corner to establish your territorial boundaries? Seems much faster. Way to be compassionate to the woman who just basically got demoted without so much as a by-your-leave.5. Again, however hostile your paraprofessional is, you do NOT blow your top at a staff member for upholding library policy. Rules are there for reasons!
6. Finally, after making all these horrible decisions, don’t be surprised that the insane board president only hired you because she wanted to find her son a bride. Don’t be surprised. Just find a new job, and for God’s sake, try one where they actually want to interview you first.

And then there’s Scott. He’s bland and kinda dense. I get that he didn’t exactly have a relationship with DJ, but they spent an entire day and night together and he doesn’t recognize her? Are we in the world of DC Comics where Superman puts on his glasses and everyone goes, “Oh, there’s Clark. Where did Superman go?”

And now, a special feature/PSA:

Shit People Say to Librarians (and What We Secretly Think)

1. You say: “I could never work in a library! I’m not quiet enough.” We think: You obviously haven’t been to a library since the 80s. Big news! Libraries (at least public libraries) are predominantly not quiet anymore. Some have “quiet areas” for people who need them, but generally the whispering and shushing are so over.

3. You say: “Oh, this is so embarrassing, but I haven’t been to a library in years!” We think: Shut up, you bitch/asshole. How would you like it if I said, “Oh, I think your job is totally irrelevant!”?

4. You say: “I buy all my books.” We think: Must be nice to have so much money. Then we think: Oh, wait, you probably only read two books a year anyway.

6. You say: “What do you learn in library school? Like, how to alphabetize stuff?” We think: Yes, because I totally missed that lesson in first grade and needed to pay thousands of dollars for graduate school to catch up. No. No, we do not go to library school to learn the alphabet. We go to learn how to best use your tax dollars to provide amazing services to your community of which you will most likely remain totally unaware because you’ve got your head buried in Google, Wikipedia, and Angry Birds.

7. Conversely, you say: “Oh my gosh, I’ve heard library science is, like, the hardest degree there is!” We think: Oh, good, we fooled another one. Grad school in my field isn’t a picnic, but I’m pretty sure we rank below the nuclear physicists in terms of effort spent getting our degrees.

Apologies to any library users out there. We librarians love you. We do know the entire world isn’t ignorant about our profession. But a lot of you are. For shame!

And that’s my rant for now. Librarian out!

4 thoughts on “Review: Love Overdue by Pamela Morsi OR Things to Never Say to a Librarian. EVER.”