In my day job as a librarian, I don’t pay much attention to self-published books. They tend to suffer from poor copy editing, stream of consciousness rambling, and awkward writing. As a general rule, librarians try to steer clear of low quality, collection budgets being limited and whatnot. As you can imagine, this stance can get a little awkward when you have a local self-published author in your office enthusing about their new paper baby, which contains their very heart and soul but which sports hilariously amateur cover art and a writing style marginally less tolerable than that of vacuum cleaner assembly instructions. Even self-pubs that get picked up by major houses tend to keep their flaws, as if the publishers thought, “Well, millions of people read it on Wattpad and weren’t bothered by the wooden, disjointed syntax, so…good enough for us!” Consequently, even when something extremely popular like Beth Reekles’s The Kissing Booth hits paperback from Random House, I try to read it before purchasing it for the collection. When I say “try to read it” I mean “I valiantly struggle through until the writing begins to suffocate my soul/I find myself mentally screaming at the stupidity of the characters/the action fades away into unnecessary minutiae like shopping, eating, pointless conversations, etc.” So far, I haven’t found a previously self-pubbed book worth purchasing for the library. Of course, I’m just the youth librarian, so true gems like Fifty Shades of Grey are beyond my jurisdiction. Excuse me while I weep hot tears of regret.

However, that’s my day job. Most of us readers aren’t librarians, and I would hazard a guess that most librarians don’t apply their collection development standards to their personal reading. I certainly don’t check for at least three positive professional reviews before I choose a book, and I occasionally read self-pubbed ebooks, if the price is right and popular ratings are high. As a book blogger (when I get around to it) I think it’s important to give readers the scoop on self published books as well as books from professional publishers, especially since it’s hard to find industry reviews on self-published items.

Here’s a self-published paranormal romance I picked up via NetGalley.

Gryphons flying past skyscrapers? Wizards battling it out in coffeehouses? Women riding motorcycles with large swords strapped to their backs? All normal sights since the Great Collision happened twenty-six years ago.

Well, not normal for everyone. Larissa Miller may have been born after the Great Collision, but as a history teacher who lives in the human-only city, she has never come into contact with any other race or species, nor has she wanted to. Her life is as ordinary as it gets – that is, until one day she walks out of her apartment and is attacked by a mob of Zombies, only to be saved by a Gargoyle.

Gargoyles trust no one outside their Clan, but due to a cryptic prophecy, Terak, Leader of the Gargoyles, has been watching over the human woman for months. While he can find no reason why the woman has been singled out, something about her stirs every protective instinct within him. When the attack confirms that the threats against her exist and are real, he convinces Larissa that though their races have never been allies, the best chance of discovering why she has been brought into his world is by working together.

In the course of their investigation Terak becomes entranced by his little human. But when he discovers why Necromancers want her and the great reward that awaits him if he betrays her, he must choose between the welfare of his Clan and not only Larissa’s life, but the fate of this New Realm as well.

I know, pretty wordy blurb, right? Still, it packs in a lot of topics that I consider high interest, like necromancers, wizards, women with swords, and, of course, Gargoyles.

Okay, show of hands. Who remembers this cartoon?

Gargoyles came on in the mid-to-late 90s when I was in junior high and heavily into fantasy and scifi, to the point that I didn’t even visit other areas of the bookstore and would spend many a tedious ten minutes picking through the school library looking for any book that involved dragons, spaceships, magic, unicorns, aliens, castles, etc, and preferably all in one package, thank you very much. I’ve never in my life gone through an “I’m too old for cartoons” phase, so I happily watched this off-beat animated series. I had also just gotten to the age where I actually cared whether or not fictional couples got together and lived happily ever after, and Gargoyles had a very star-crossed couple, a human police officer and the leader of the Gargoyles. There were a few hints that they were romantically interested in each other, and they were PERFECT for each other: her, the brave police officer who protected the secret of his existence but whose humanity left her vulnerable to supernatural attack, him, the strong-yet-kind leader of his people. They could have been a super couple had it not been for one problem… 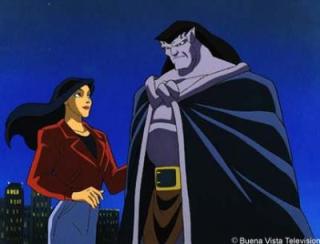 But for other women out there who watched this show as kids and thought, “Man, it is a shame about that whole wrong-species issue,” we can now get a bit of indirect closure via Stone Guardian.

I won’t lie, the book has some of the common self-pubbed flaws, mainly typos and awkward writing, at least in the e-galley version I read. A friend of mine has said that he doesn’t like it when he’s really involved with the story or characters in a book and wants to keep reading, but the writing makes him feel like he’s mentally editing as he reads. I felt that way fairly often while reading Stone Guardian, but to the book’s credit, the plot and characters not only kept me reading the story, they made me enjoy it.

Terak the Gargoyle is that wonderful mix of alpha-male leader, gentle romantic, and out-of-his-depth suitor that most writers just cannot nail. I mean, get right, not NAIL-nail. I have no idea who most writers are nailing. This blog might be more interesting if I did. Anyway, Terak is the firm and sure leader of his Clan, providing guidance and protection to his people, who were outcasts in the magical realm and are double outcasts now that there’s a humans-only realm interlocked with theirs. He’s relentless and vicious in his protection of Larissa, as well. However, he’s extremely shy in matters of the heart, not sure if Larissa will be able to accept his differences. Because he’s a giant stone monster. A giant HOT stone monster, though, which seems to mitigate the interspecies weirdness as far as Larissa is concerned.

I didn’t love Larissa as much, but she’s likable. She bends to the will of her overprotective father and brothers too much for my taste, and while a lot of her character growth involves her breaking out of that shell, I kept thinking, “You are 26 with a college degree and your own career, and you’re STILL letting your brothers chase off your dates? Really?” On the other hand, at least Monsch manages to make her vulnerable without making her a wimp. She’s a nonmagical human with supernatural creatures after her. She does actually need Terak’s protection, and even then, she’s not above using her wits (or her car) to get out of danger, although she also makes a couple of doofy decisions that made me groan a little.

I liked the friendship that develops between Larissa and Terak before they get romantic. I didn’t feel like it was all about sex for them. However, it did reach the point where I started thinking, “Are they EVER going to kiss?” To be fair, though, this book is heavy on plot. It’s definitely a romance novel, but it’s not the type of romance novel where every single plot point revolves around the hero and heroine getting together. The fate of the world is at stake here. The fate of two worlds, actually, ours and the magical world that hit ours and got stuck with it like two teenagers with braces trying to make out. (I’ve heard that’s an urban legend, by the by, but the mental image cracks me up. I want to believe!) There are plenty of secondary characters and a few urban battle scenes in between Larissa/Terak interactions. Oh, also, I’m going to spoil something here: Gargoyles mate for life. It’s not treated as a huge surprise, so I don’t feel bad about spilling it. I think if Terak had mentioned it sooner, I wouldn’t have gotten frustrated with the slow romantic progress, because once he said that, I thought, “Oh, okay, no wonder he wanted to take his time and get to know her first!”

Overall, I feel like this author has a great deal of talent and would love to see what a great editor could do for her. In the meantime, I like her enough as a self-pub to stick with her. If you like paranormal romance or urban fantasy, you might give Stone Guardian a try. In the meantime, here’s a Gargoyle riddle I just made up:

Q: Why are male Gargoyles so good in bed?
A: Because they’re always hard!

Get it? Because stone? Thank you! I’ll be here all week!

← Q and A with Loretta Nyhan
Review: Love Overdue by Pamela Morsi OR Things to Never Say to a Librarian. EVER. →