You Know What You Have To Do by Bonnie Shimko

I think I might quit using NetGalley. For every ARC I love, there are 10 I loathe. I bring you…one of the other 10. 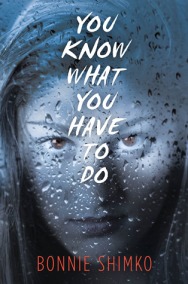 You Know What You Have To Do

This quirky, appealing YA novel turns formulaic teen fiction on its head as funny, feisty fifteen year-old Mary-Magdalene Feigenbaum (otherwise known as Maggie) suddenly faces more than the usual typical YA concerns: a voice in her head that is telling her to kill people. Not just anyone—each time the target is someone who has done something terrible to a person Maggie cares for. You know what you have to do, the voice commands. Maggie struggles to resist, but the voice is relentless. With rising suspense, this story of psychological horror introduces a narrator whose own unique voice and irreverent humor are unforgettable—an unlikely hero fighting a desperate battle against incomprehensible evil.

I’m going to do nothing but complain about this book, so if you don’t care for negative reviews, now is the time to walk. Oh, also, spoilers shall be rife because I have soap-boxing to do and don’t care if I ruin the book for anyone in the process, so if you’re planning to read it and don’t want it spoiled, again, walk on. Come see me next time.

For those of you who are still with me, allow me to start with the blurb. Don’t let it fool you. Apart from the “voices in head tell her to kill people” part, the blurb is so wrong. Quirky? Appealing? Well, I suppose it’s quirky to have a teenage heroine who goes around murdering people, true. I didn’t find anything about this story appealing, though.

Maggie isn’t funny, unique, or irreverent. Maggie is a bee-yotch. Her friends are so stupid! Her mom is so lame! The stalker boy across the street is so irritating and should stop putting notes in her locker even though she hasn’t said a word to him about how irritating she finds his behavior! Whine whine.

Each time the voice tells Maggie to kill someone, the target is NOT someone who has done something terrible to a person Maggie cares for. The three times she actually kills, all of the victims have committed a wrong against someone she at least knows. However, what about when the voice tells her to kill the infant she’s babysitting? What about when it tells her to run down a stranger with a car? The fact that she doesn’t make those kills doesn’t mean she’s hearing some warped voice of justice. The voice chooses victims at random. The author only allows Maggie to kill unsympathetic characters, probably in an attempt to keep Maggie sympathetic. A failed attempt.

What bothers me about this story, though, isn’t the fact that Maggie’s a whiner. YA fiction is filled with whiny protagonists as authors strive and fail to nail that angst. It’s not the murders, which actually gave the author a totally-squandered chance to do something original. It’s not even the fact that she presents a nebulous mental illness and never nails down what exactly it is, but just lets a generic veneer of crazy settle over her heroine. Okay, no, that did actually bother me. There’s enough stigma and misconception attached to mental illness as it is, and Shimko does nothing but play into the sensationalism. Still, that’s not my biggest gripe.

So, let me ask a question. Who else is sick of hearing about rape? I don’t mean in the sense of “Gosh, I wish people would shut up about rape.” I mean that I am tired of hearing that it’s happened again. I’m tired of hearing the dripping sexism even in sympathetic coverage of the crimes. I’m tired of it being treated as a women’s issue when men are also raped and assaulted, because it seems to me that focusing on raped women somehow implies that women alone are weak enough to fall prey to these crimes, or that we are somehow culpable.

In You Know What You Have To Do, Maggie goes to the movies with a boy who seems perfect, until he gets her in the back row of the theater and decides not to take no for an answer. Maggie is able to fend him off, mostly because other people are  present. When her stepfather asks her what happened, she tells him it’s nothing to call the police about, which greatly relieves him. I’m sorry, I know that it would be awfully difficult to prove that the kid kept groping her breasts after she told him to stop, but it’s still sexual assault. To me, the exchange with her stepfather gives the impression that if actual penetration doesn’t take place, then no crime has occurred and the molester should go on with his life unhindered.

Maybe you think I’m overreacting, but wait until you hear the rest of the story. So, an upset Maggie tells her BFF Abigail, a goody-two-shoes teacher’s daughter Maggie finds utterly boring yet hangs out with almost exclusively, about her terrible date. Abigail promptly blames Maggie for sending mixed signals by sitting in the back row of the theater. Since we’re always hearing how shallow and dull Abigail is, the conversation initially comes across as one more strike against her. When Abigail goes out with the offending boy, we know what’s going to happen. Abigail’s going to get raped and have to eat crow, right? Well, kind of. She does admit that Maggie was right. The guy does rape her. But guess what? She likes it! That’s right. It seems that if you just relax for a minute, being raped is completely pleasurable. In fact, she continues a sexual relationship with the rapist, who eventually dumps her. Of course, the implication is that Abigail’s stupidity and shallowness are to blame for the entire situation. If she’d just listened… If she hadn’t been a big ol’ rape-loving slut… I read that section in absolute stunned disbelief. I read that section only minutes after reading about the victim’s testimony in the Steubenville trial. I read that section and thought I might get sick to my stomach. I don’t care how much of a fool a character is meant to be. Throwing in a plot point where the character enjoys rape? Irresponsible, not to mention beyond the bounds of credibility. And then going on to shame the character for her poor subsequent decisions? What the hell? What editor let that slide by?

Oh, and don’t let’s forget the romantic way her stepfather met her mother. Her mother, 18, pregnant with Maggie, alone, and desperate, met this nice mortician who was only about 40 years older than she was, and he blackmailed her into marrying him. But he never had sex with her and really he just wanted to raise a family, even if it was someone else’s kid. So that’s okay, right? He’s a sweet guy, right? He’s certainly Maggie’s hero.

I spent a lot of this book thinking, “Blah, I don’t want to review this.” When I got to the rape part, though, I decided it was best to warn people off. Don’t buy this book. Don’t bother checking this book out from your library. If you see a teen girl in your life reading this book, take a second to talk to her about what rape is, what victim-shaming is, and how often rape is inaccurately portrayed in our society. She might roll her eyes at you, but the alternative is to stay silent, and can any responsible adult do so?

Skip this. The author clearly needs to go re-read Speak.

Category : Rants, Reads, Reviews
Tags : contemporary fiction, mental illness, serial killers, YA fiction, You Know What You Have To Do

← Marco Impossible by Hannah Moskowitz
Read It, Scene It: The Borrowers vs. The Secret World of Arrietty →