Hi, Infinite Readers! I wanted to let everyone know that Infinite Reads is on finite hiatus as I prepare to travel out-of-state with a very sexy man to interview for my dream job. I will be back with more 50SoG, new releases, and sundries very soon.

In the meantime, here are some great books I’ve read lately!

L.A. is no place for widows. This is what forty-four-year-old Hannah Bernal quickly discovers after the tragic death of her handsome and loving husband, John. Misery and red-rimmed eyes are little tolerated in the land of the beautiful. But life stumbles on: Hannah’s sweet three-year-old daughter, Ellie, needs to be dropped off at her overpriced preschool, while Hannah herself must get back to work in order to pay the bills on “Casa Sugar,” the charming Spanish-styled bungalow they call home.

Fortunately, Hannah has her “Grief Team” for emotional support: earth mother and fanatical animal lover Chloe, who finds a potential blog post in every moment; aspiring actress Aimee, who has her cosmetic surgeon on speed dial; and Jay, Hannah’s TV producing partner, who has a penchant for Mr. Wrong. But after a series of mishaps and bizarre occurrences, one of which finds Hannah in a posh Santa Monica jail cell, her friends start to fear for her sanity. To make matters worse, John left their financial affairs in a disastrous state. And when Hannah is dramatically fired from her latest producing gig, she finds herself in danger of losing her house, her daughter, and her mind.

AND ALSO Hannah sees dead people. She’s got medium ability on a large scale (get it?) After her husband dies, Hannah begins seeing spirits everywhere, and speaking with them, too. I have no clue why this huge plot point is missing from the blurb, but now I’ve cleared it up for you. Anyway, don’t take the plot too seriously or ask too many “Whys” about the ghosts. Just sit back and laugh your butt off, because this book is hilarious.

Twelve-year-old September lives in Omaha, and used to have an ordinary life, until her father went to war and her mother went to work. One day, September is met at her kitchen window by a Green Wind (taking the form of a gentleman in a green jacket), who invites her on an adventure, implying that her help is needed in Fairyland. The new Marquess is unpredictable and fickle, and also not much older than September. Only September can retrieve a talisman the Marquess wants from the enchanted woods, and if she doesn’t . . . then the Marquess will make life impossible for the inhabitants of Fairyland. September is already making new friends, including a book-loving Wyvern and a mysterious boy named Saturday.

With exquisite illustrations by acclaimed artist Ana Juan, Fairyland lives up to the sensation it created when the author first posted it online. For readers of all ages who love the charm of Alice in Wonderland and the soul of The Golden Compass, here is a reading experience unto itself: unforgettable, and so very beautiful.
I disagree with the comparison to Golden Compass, but then, I’ve never cared for Golden Compass. Either way, this book has its own unique soul. Valente’s incredibly twee and charming style is offset by truths about adventures and fairy tales. There must always be blood. Read this. If you don’t like it, it’s possible that you, unlike the book, have no soul. Or at least no shadow. (In-joke!)

Throne of the Crescent Moon

DAW, $24.95 hardcover, 978-0756407117, February 2012
The Crescent Moon Kingdoms, land of djenn and ghuls, Khalifs and killers, is on the brink of civil war. To make things worse, a series of brutal supernatural murders strikes at the heart of the Kingdoms. And it’s up to Doctor Adoulla Makhslood to solve them.“The last real ghul hunter in the great city of Dhamsawaat,” Adoulla just wants a quiet cup of tea. But when an old flame’s family is murdered, he is drawn back to the hunter’s path. Recruiting old companions and new, Adoulla races against time–and struggles against his own misgivings–to discover a plot for the Throne of the Crescent Moon that threatens to turn Dhamsawaat, and the world itself, into a blood-soaked ruin.
Excitement, adventure, romance, really gross foes, a break from the traditional West-centric fantasy mindset. I’m sorry, did you need to hear more? I thought you’d be out looking for this book by now.

The Fault in Our Stars

Dutton Juvenile, $17.99 hardcover, 978-0525478812, January 2012
Diagnosed with Stage IV thyroid cancer at 13, Hazel was prepared to die until, at 14, a medical miracle shrunk the tumours in her lungs… for now. Two years post-miracle, sixteen-year-old Hazel is post-everything else, too; post-high school, post-friends and post-normalcy. And even though she could live for a long time (whatever that means), Hazel lives tethered to an oxygen tank, the tumours tenuously kept at bay with a constant chemical assault. Enter Augustus Waters. A match made at cancer kid support group, Augustus is gorgeous, in remission, and shockingly to her, interested in Hazel. Being with Augustus is both an unexpected destination and a long-needed journey, pushing Hazel to re-examine how sickness and health, life and death, will define her and the legacy that everyone leaves behind.
Everything you’ve heard about the awesomeness of this book is 100% true. Everything you’ve heard about how it will rip out your heart and stomp on it is also 100% true. The journey makes up for the sorrow, I promise. You won’t be sorry you read it. You’ll be sorry you didn’t read it sooner.
And finally…. 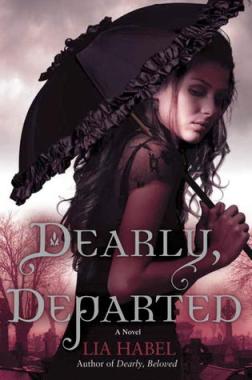 Random House, $16.99 hardcover, 0345523326, October 2011
The year is 2195. The place is New Victoria—a high-tech nation modeled on the mores of an antique era. Sixteen-year-old Nora Dearly is far more interested in her country’s political unrest than in silly debutante balls. But the death of her beloved parents leaves Nora at the mercy of a social-climbing aunt who plans to marry off her niece for money. To Nora, no fate could be more horrible—until she’s nearly kidnapped by an army of walking corpses. Now she’s suddenly gunning down ravenous zombies alongside mysterious black-clad commandos and confronting a fatal virus that raises the dead. Then Nora meets Bram Griswold, a young soldier who is brave, handsome, noble . . . and thoroughly deceased. But like the rest of his special undead unit, Bram has been enabled by luck and modern science to hold on to his mind, his manners, and his body parts. And when his bond of trust with Nora turns to tenderness, there’s no turning back. Eventually, they know, the disease will win, separating the star-crossed lovers forever. But until then, beating or not, their hearts will have what they desire.
Zombie love? GROSS. I only checked this book out to see how the author could possibly handle the topic tastefully (no pun, no pun!). I’m tired of zombies. Also, I didn’t realize it was a steampunk book until I started reading it. I think steampunk is just silly. I should hate this book. One problem: it’s SO GOOD. The hero’s a fantastic guy, the heroine is brave, feisty, and intelligent, AND rather than leave all the focus on them and their romance like most YA authors would do, Habel gives secondary characters entire chapters and plotlines of their own. Guess what? The secondary characters are also awesome. Love this book.
So, I must say goodbye again for a little while, but I shall return. Everybody wish me luck on my interview!
Also, check out my lovely travel reads!

← Dark Horse Vamps It Up
We Are Not Alone! →