Dark Horse Vamps It Up

Ah, summer. The heat might be atrocious (make that “is atrocious”) but think of all the blessings: watermelon, 4th of July, pool parties, long sunlit hours, vampires…

Dark Horse Comics recently released graphic novel tie-ins to two popular vampire series, namely P.C. Cast’s enormously popular teen book series The House of Night, and the first installment in a new Buffy-verse series called Angel & Faith, starring Angel and, well, Faith. Besides vampires and popularity, the two series have only one other thing in common: I don’t like them. I abhor The House of Night series. While I love Buffy: The Vampire Slayer (the show, not the character), I detest Angel (the show, not the character.) Still, I requested both House of Night: Legacy and Angel & Faith: Volume I because sometimes characters or stories that don’t work as prose books or movies do work as graphic novels. Dark Horse isn’t known for shoddy quality, either. Mostly, it’s nice that there’s still a medium in which Angel doesn’t sport a double chin.

So, how do these summer time creature-features stack up?

Until recently, Zoey Redbird was an average high-school student worrying about grades, boys, and breakouts. But priorities have a way of changing when you are Marked as a vampyre, enroll in the vampyre academy House of Night, and have to figure out a whole new social hierarchy, affinities for elemental magic, and physiological changes that make you crave blood.

Have you read the House of Night books? If not, you might find this book extremely confusing. If you have read the series and liked it, or at least liked the world if not necessarily the main characters, you’ll likely enjoy Legacy.

A companion to the novels, Legacy shows Zoey trying to cope with her new responsibility as leader of the Dark Daughters following the events of Marked, the first book in the series. However, Zoey isn’t the focus. The actions of the main characters form a frame story for five short histories of famous vampires. Pardon me — vampyres. Each story relates to one of the natural elements that form the basis of vampyre rituals: earth, air, water, fire, spirit.  Readers will recognize the stories, which feature historical and legendary figures such as Boadicea, Hippolyta, and Cleopatra, all changed into vampyres for this retelling.

Despite the mediocre writing, Legacy succeeds by virtue of its beautiful illustrations: frozen landscapes of the dark North, lithe sea sirens, and various incarnations of the beautiful and serene vampyre goddess Nyx. The color-drenched images evoke much of the familiar imagery from the novels, including the much-coveted divine tattoos.

If you aren’t a fan of the series, give Legacy a pass, but if you’re a Nightaholic, try it! 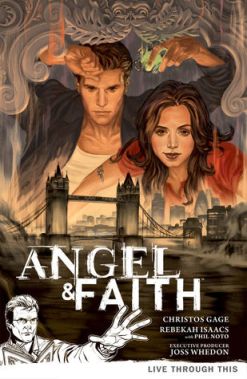 Angel has made bad choices in his life. Most recently? While possessed, he killed Giles. However, he believes he’s found a way to make amends, by bringing the Watcher back from the grave! Cue Faith—rebel Slayer, and Angel’s only ally—who only supports this harebrained scheme in order to keep her friend from catatonia. New threats emerge as this unlikely duo struggles against real and personal demons alike, while hitting the dark streets of London! Collects Angel & Faith issues #1–#5, the Live through This arc, and issue #6, the In Perfect Harmony one-shot.

Angel and Faith have always had a nice chemistry, a mutual understanding of the search for redemption. Faith’s brash impulsiveness sets off Angel’s broody nature well. However, Live Through This isn’t the same old, same old.  Roles reverse as Angel takes off on a hare-brained scheme and Faith tries to talk sense into him before they wind up with Zombie Giles lurching around and going “Urgh” in a British accent.

Although Giles is now dearly departed, readers get a window into his world through excerpts from his Watcher diaries, which Angel is using to aid in his quest. Gage nails each character’s voice perfectly, but he does a particularly fine job with Giles, which makes Giles’s presence loom large over the story arc.

The search ties in with mysterious disappearances, a visit from Angel’s former evil minions Pearl and Nash, and a possible chance at a new life for Angel. Faith faces difficult choice after difficult choice as she tries to help the man/monster who has always helped her.

While not as snappy and funny as the usual Whedon-based experience, Angel & Faith has an intimacy and emotional depth that the large ensemble cast of the Buffy graphic novels cannot quite deliver. Buffy fans, pick this one up, even if you don’t like Angel (the show, not the character.)

***These reviews refer to electronic galleys provided by the publisher via Netgalley. No money changed hands and no demons were destroyed in the writing of this post.***

One thought on “Dark Horse Vamps It Up”