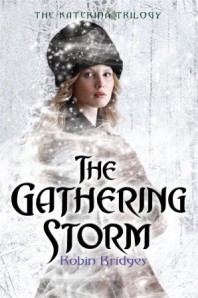 The Gathering Storm (The Katerina Trilogy, #1)

St. Petersburg, Russia, 1888. As she attends a whirl of glittering balls, royal debutante Katerina Alexandrovna, Duchess of Oldenburg, tries to hide a dark secret: she can raise the dead. No one knows. Not her family. Not the girls at her finishing school. Not the tsar or anyone in her aristocratic circle. Katerina considers her talent a curse, not a gift. But when she uses her special skill to protect a member of the Imperial Family, she finds herself caught in a web of intrigue.

The time has come for Katerina to embrace her power, but which side will she choose—and to whom will she give her heart?

Okay, Russian court, listen up. I’m going to need everyone who is a fairy, werewolf, witch, wizard, necromancer, vampire (of any type, upyrs, so stop skulking in the back), zombie, or other minion of magic on THIS side of the room, and all the non-magical humans on THAT side. Right, so that’s, uh, two normal humans. Guys, your complementary train tickets to France are in the foyer. We just thought we’d give you the opportunity to get out while you can.

Katerina lives in a dangerous monster mash version of 1888 Russia. She’s a duchess with decidedly modern sensibilities who wants to study medicine. Also, she can raise the dead! Since necromancy is considered a curse, though, she guards that bit of information zealously. Her feminist leanings earn her enough hysterical outbursts from her traditionally-minded mother already. While she’s avoided both getting engaged and the supernatural so far, at age 16, Katerina is becoming a marriageable young lady. Not only does her mother not support her ambitions, but two princesses at her boarding school are determined to play matchmaker for Katerina and their brother. Unfortunately, the sisters are evil witches (literally), their brother is a vampire, and don’t even get me started on Katerina’s potential mother-in-law. If Katerina doesn’t marry Prince Evil Vampire Face (not his real name), her family is in grave danger. If she does marry him, she can kiss medical school, the dashing-yet-distant Grand Duke George, and the future of the free world goodbye. (I just want to say that when I was 16, my biggest decision was whether to take Spanish III or be a library page.)

While it has its flaws, I enjoyed this book. It combines girls’ boarding school drama and teenage romance with historical fiction and the burdens/joys of belonging to aristocracy, then dyes the whole cloth paranormal with an assortment of magical people and creatures. Bridges gives us a glamorous world, an exciting plot, and a heroine who knows the difference between a gruff but stalwart love interest and a controlling d-bag vampire. (Confused, yourself? See The Undateable Undead.)

Katerina’s extremely likable. She’s smart, ambitious, and not willing to bow to society’s (or her mother’s) dictates. At the same time, she’s a product of her upbringing. She would never say, “Forget you people, I’m taking the MCAT whether you like it or not.” She’s also very self-conscious about her curse, especially since she tends to raise the dead by accident. Occasionally I got a bit annoyed at her for not telling someone about her secret sooner, especially once the scheming meanie vampire family started plotting to use her for their own purposes. She has plenty of possible confidantes, including her father, who is just an all-around great guy. He and Katerina’s mother remind me a lot of the Bennett family parents in Pride and Prejudice: Mom is hysterical and obsessed with marrying off her daughter, Dad is a learned man who would rather his daughter live at home forever and do whatever makes her happy.

I loved the setting. Imperial Russia! The balls, the gowns, the dinners, the carriage rides, the intrigue! (I was a huge fan of Anastasia. The cartoon one with the bat and the dog? I even bought the sequel about the bat. I’m not ashamed.) I did want a bit more Russian culture laced into the narrative, but the author did have her hands full with the plot.

I appreciate the amount of supernatural species Bridges builds into her world, but if you want to keep them all straight, you might need to make a chart. The climax of the book got quite tangled with different supernatural elements colliding, and I kept having to read certain passages over again to get the gist of the action, but the ending that followed the climax grabbed me.

Overall, a little convoluted, but between the charm of the setting, the heroine, and the romantic hook at the end, I will pick up volume 2!

I received a copy of The Gathering Storm from Netgalley. No money changed hands in the course of this review.

3 thoughts on “Review: The Gathering Storm by Robin Bridges”